No, I’m not referring to any physical damage associated with my jaw dropping to the floor upon hearing George Bush say that Gen. Mr. Pervez Musharraf has not “crossed any lines” in his full-scale assault on civil society. There are so many things to be said in response to that ridiculous statement, but one particularly disturbing irony seems to stand out.

We have long known that when it comes to torture, the Bush administration has at times drawn “the line” in a rather peculiar place, at one point seeking to limit the definition of torture to acts “likely to result in permanent and serious physical damage … ris[ing] to the level of death, organ failure, or the permanent impairment of a significant body function.” Well, after several weeks in which many have feared that Musharraf, Shaukat Aziz, and their agents might be perpetrating unspeakable crimes in Pakistan’s jails, it now appears that Musharraf has crossed even the dubious “line” drawn by the 2002 Office of Legal Counsel memo:

Former president Supreme Court Bar Association of Pakistan Mr Munir A. Malik has suffered renal failure. He has been shifted to ICU in PIMS where he is undergoing kidney dialysis. In panic, Musharraf has lifted the detention orders on Munir A. Malik.

The News is also reporting that Munir Malik has told doctors that he was served juice in Attock jail. Upon drinking the juice his condition start deteriorating. Since then his kidneys have failed and doctors are also concerned about liver function. [link]

See the interview with Malik in his hospital bed by Dawn News (in English) in the first video above. (The second video is the first part of Malik’s spirited address on the importance of separation of powers, sprinkled with Urdu but mostly in English, to the Supreme Court Bar Association earlier this year after the reinstatement of the Chief Justice of Pakistan. The full, translated text of that address and part two of the video are available here.) 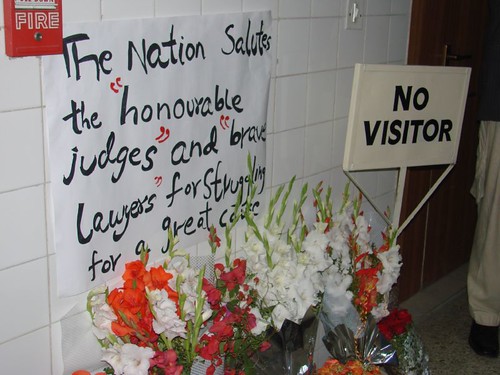 Malik’s apparent poisoning is not the only atrocity committed by Musharraf against his civil society opponents:

Mr. Munir is one of four eminent advocates, all of whom were linked to the Chief Justice’s restoration struggle, who were incarcerated on November 3rd — the other three being Mr. Ali Ahmed Kurd, Justice (Retd.) Tariq Mahmood and Aitzaz Ahsan. There are persistent rumours that Mr. Kurd and Justice Mahmood have been subjected to barbaric physical torture. These rumours are lent credence by the fact that Justice (Retd.) Tariq Mahmood too has been shifted to Services Hospital from jail in ‘critical condition’ on the night of November 25th. Furthermore, no family members or media personnel have been allowed to visit him either in jail or hospital. Mr. Aitzaz Ahsan was seen in public on November 25th when he came to submit his nomination papers under police guard. He appeared visibly ‘pale and weakened’, according to eye witnesses, as he was escorted to and from the Sessions Court, Lahore, having been shifted to house arrest from Adiyala Jail. [link]

The moving ordeal of an ailing but defiant Justice (retd) Tariq Mahmood lodged in the Sahiwal jail for the last 23 days, as narrated by his struggling wife, brought tears to the eyes of hundreds of members of the civil society and political workers who watched the ‘Capital Talk’ show of Geo TV live on the footpath of Islamabad on Monday.

Justice Tariq, once the top judge of the Balochistan High Court, who had resigned after refusing to conduct the controversial presidential referendum of 2002, was now being made to sleep on the cold floor of the Sahiwal jail to break his nerves and punish him for his acts of defiance since he quit the judiciary to register his protest.

As his health condition deteriorated in the Sahiwal jail, Tariq Mahmood who is said to have developed severe back pain has now been rushed to a Lahore hospital for his medical tests.

‘My 11-year-old son keeps asking daily since November 3, where is my father. Now I have run out of words to tell him where is he,’ Mrs Tariq said in a choking voice that greatly moved all the participants of the talk show. [link]

More links and a roundup are available at Sepia Mutiny.

So it seems that we are left to ask, yet again: exactly where does the Bush administration draw “the line” when it comes to torture? It is also worth recalling in this context that Musharraf’s original attempt to sack Chief Justice Iftikhar Muhammad Chaudhry came exactly one day after Chaudhry made clear that the Supreme Court of Pakistan would investigate the disappearances of hundreds of individuals since 2001. The Bush administration was silent about Musharraf’s interference with judicial independence then, and it continues to be silent about the importance of judicial independence in Pakistan today. Many Pakistani citizens, of course, have not been.