The crisis in Pakistan over General Pervez Musharraf’s “suspension” of the Chief Justice of Pakistan, Iftikhar Muhammad Chaudhry, has only deepened since Mike first posted about it earlier this week, but it continues to garner surprisingly little news coverage in the United States. Musharraf has still offered no details of the allegations against Chaudhry, but his suspension came one day after the now “non-functional” Chief Justice gave notice that he intended to investigate allegations of disappearances at the hands of Pakistani security forces, which have increased dramatically since 2001. (On the surge in disappearances, the Guardian has chilling details.)

The move to dismiss Chaudhry is hardly the first time in the postcolonial history of the subcontinent that judicial independence has been threatened. In each of Pakistan’s four periods of military rule, the coup leaders have moved with some success to legitimize their usurpation in the courts, which have elaborated what Tayyab Mahmud has aptly termed a “jurisprudence of successful treason.” Nor has interference with judicial independence in Pakistan come solely from the army. Only two years before he was deposed by Musharraf, former Prime Minister Nawaz Sharif’s ugly dispute with (and effort to remove) one of Chaudhry’s predecessors as Chief Justice culminated in a physical attack by a mob of Nawaz’s supporters on the Supreme Court building.

When asked to legitimize the army’s interventions into domestic politics, Pakistani judges have frequently acquiesced — as judges have, to be sure, in other countries during emergency-like moments, such as the United States in the face of internment and India in the face of Indira Gandhi’s Emergency. While such acquiescence has usually been discredited over time in other countries, in Pakistan the result seems to have been the validation of a central role for the army in domestic affairs. Those Pakistani judges who have tried to resist typically have been sidelined by the military regime; when Pakistani courts have acted somewhat more assertively in response to the army’s claims, it has tended to happen after civilian rule has been restored, and without repudiating the notion that military intervention into politics is valid and legitimate.

So far, that basic script has been followed once again under Musharraf’s regime, with the Supreme Court validating his coup in a March 2000 decision. However, during Chaudhry’s twenty-one month tenure as Chief Justice, the Supreme Court of Pakistan has increasingly shown the potential to become a thorn in the regime’s side. Since Musharraf already has significantly weakened the civilian bureaucracy and provincial governments, the judiciary is, along with the media, one of the few institutional power centers with the capacity to pose a challenge to the role of the army.

In Pakistan, the clichéd adage goes, politics is often driven by three As: Army, Allah, and America. Here in the United States, we like to focus (that is, if we are paying attention at all) on the first two, variously condemning the army’s interruption of the democratic process and raising the specter of Muslim extremists using Pakistan as a staging area for terrorism or even ascending to power in Musharraf’s place. As Americans, however, perhaps we should be devoting greater attention to the third A, and in particular how the role of the United States may be interacting with the role of the army and of religion in Pakistani affairs. Here’s what U.S. officials initially had to say about the current crisis in Pakistan:

In this particular instance, however, it is an “internal matter” whose triggering event — an investigation into post-2001 disappearances — may well have been influenced or more directly shaped by U.S. policy:

[U]ntil 9/11, disappearances were rare. Then, in late 2001, as al-Qaida fugitives fled from Afghanistan into Pakistan, Musharraf ordered that the agencies show full cooperation to the FBI, CIA and other US security agencies. In return, the Americans would give them equipment, expertise and money.

Suddenly, Pakistan’s agencies had sophisticated devices to trace mobile phones, bug houses and telephone calls, and monitor large volumes of email traffic. “Whatever it took to improve the Pakistanis’ technical ability to find al-Qaida fighters, we were there to help them,” says Michael Scheuer, a former head of the CIA’s Osama bin Laden unit.

The al-Qaida hunt became a matter of considerable pride for President Bush’s close friend, the president of Pakistan. “We have captured 672 and handed over 369 to the United States. We have earned bounties totalling millions of dollars,” wrote Musharraf in his autobiography last year. (The boast sparked outrage at home in Pakistan and was scrubbed from later Urdu-language versions of his book.) Prize captures included the alleged 9/11 mastermind Khalid Sheikh Muhammed, who has apparently confessed to a string of terror plots after four years as a captive, and Abu Faraj al Libbi, another alleged bin Laden lieutenant. But certain innocents were also swept up in the dragnet.

The truth is that the American government still quietly supports the disappearances of al-Qaida suspects, says Ali Dayan Hasan of Human Rights Watch, which has documented many cases. “The abuse has become even more brazen because of US complicity,” he says. He claims that American officials are regular visitors to ISI safehouses in Islamabad, Lahore and Rawalpindi where torture has occurred. They have supervised interrogations from behind one-way mirrors, he says. In FBI internal documents, he says, torture is referred to as “locally acceptable forms of interrogation”.

For some detainees the safehouses are the back door to the mysterious world of CIA “black sites” – secret prisons in Afghanistan, eastern Europe and across the Arab world where torture is allegedly rife. [link]

There is some irony that, in a week in which Khalid Sheikh Muhammed’s confession has received so much media attention in the United States, the deepening political fallout in Pakistan triggered by an investigation into the very policies and practices associated with his capture have received so little. It seems possible that, like the investigations in Italy and Germany into extraordinary rendition, an investigation into post-2001 disappearances in Pakistan could reveal information that the U.S. government would prefer the public not to know. The broader point is that there are many ways in which Pakistani political developments are being shaped by what the United States is doing, even though those influences may often be far from our public consciousness. 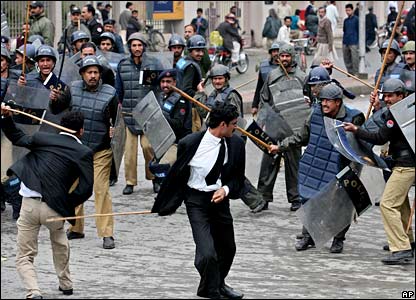 To echo Mike’s comment about the courage of Pakistani lawyers and others resisting Chaudhry’s suspension and house arrest, the scenes in Pakistan are quite remarkable. (Here is a particularly vivid set of photos.) Prominent and distinguished lawyers in India have expressed their solidarity with the “courageous lawyers in Pakistan who are opposing this frontal assault on the judiciary,” and they deserve the active support and encouragement of American lawyers as well.